Today December 21st is Winter Solstice, the shortest day of the year-and also the longest night for that matter. For the most part I enjoy the winter season, don’t mind the bundling up to go outside into the crisp air. Most all the leaves have fallen which now gives me a different perspective of the land around us, can see barns and rooftops in the distance that are normally hidden during the summer. Also the ability to hear the slightest sounds improves now that the leaves aren’t muffling the air.

There is a certain enjoyment of having the tea kettle simmering on the stove all day putting a bit of moisture in the air and knowing a hot cup of tea can be had almost immediately. Or coming into the house to the smells of something simmering and or baking…chili, soup, stew, bread, cake, or cookies, at least something along those lines are being prepared. 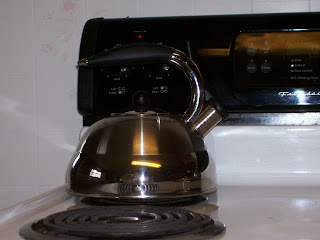 The goats which were bred during September and October are starting to get their round baby bellies, prompting me to start getting things together and organized for upcoming February kidding season. By the time kidding is here, our days will have noticeably lengthen and the sun will be rising and setting in a different spot on the horizons making me start to look forward to the warming weather that we know will be here soon.
Posted by Hidden Brook Farm at 5:50 AM

Such a fresh outlook on winter. Seriously...we grumble about being cold, the mud, you name it, but if we open our eyes and minds, we remember to see the joys in winter! I am speaking for myself. :)Thank you!

Thanks for coming by my blog!

Have always enjoyed the way winter changes our general routines. Find it easier now to stay warmer than it is to get cool during summer-lol