Hey diddle diddle,
The cat and the fiddle,
The cow jumped over the moon;
The little dog laughed to see such sport,
And the dish ran away with the spoon.


As far back as my memories will take me, there has always been a slight fascination with the moon, the constant changing of shape, color, position in the sky.

The fact that every full moon rises in the east as our sun sets in the west. It travels through the night making its way to the west horizon to set just as the sun rises again the next morning. The two always stay in sync regardless of the season and even though I know the scientific reason why this is so, it never fails to fill me with wonderment as I watch it happen.

The moon was both at its closest point to the earth in its orbit and in full phase on December 12. This means it was the largest, brightest full moon of the year. Cloud cover has been so heavy the last couple of months that I have missed the actual setting of the full moon; but it has stayed clear enough in the early evening for me to watch the moon rise. 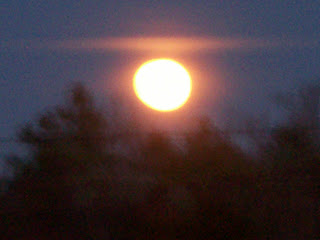 Very interesting! And that is a beautiful photo!

Thank you, those never quite turn out as brillant as the real thing-but that doesn't seem to stop me from trying-ha. Think that was the last time we had some clear sky until this past Friday.