You can find them in the spice aisle, 2 beans locked in a bottle costing around $10.00. They didn’t get bought often; maybe around the holidays. One bean was used to make flavored sugar, the other was saved to be put in a batch of homemade ice cream the following summer. They are skinny and hard, making it a bit of a challenge to split them lengthwise in order to scrape the seeds out of the pod. Seemed well worth the trouble and cost while eating that bowl of ice cream though, and you can soak the pod in a tiny bit water in order to make them easier to cut open.

The vanilla bean is the fruit of an orchid. After the vines are planted, it will take 3 years for the first flowers to appear. The flowers must be hand pollinated and the long green pods are hand picked about 9 months later. Then they go through a curing process that takes several more months. No wonder they are so expensive.

There are places to buy Madagascar vanilla beans in bulk. To purchase a ¼ pound gives me about 25 beans for just under $24. This included the shipping costs, making them less than a $1 a bean! The real treat came with the beans themselves. Even though they had been dried, their averaged length was 7 inches, plus they were soft, pliable, and slightly oily with the most intense mouth-watering vanilla aroma. 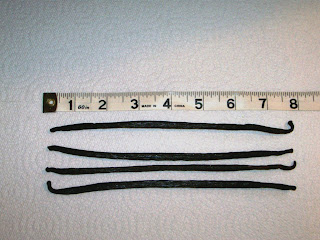 With the cost more affordable there are several ways the beans are used here now. Homemade Vanilla Extract, Kahlua, Crème Brulee, Flavored Sugar, Maple Syrup, Honey. There are endless possibilities of flavoring items or using the scraping in a variety of recipes dishes.

You will see many recipes for vanilla extract calling for about 3 beans per cup of alcohol ready to use in 4 to 8 weeks. Although it is good, this type is really little more than flavored booze. The following recipe is closer to FDA requirements for a true single fold extract without any additives.

Split the beans lengthwise using a knife or kitchen shears. If desired you may cut the length of the beans so they can be covered with the vodka easily.
Place beans in the jar & pour the vodka making sure the beans are completely covered.
Store in a cool, dark place, shake daily for the first week. Then shake occasionally for the next 6 months.

Like wine if you allow the extract to age, it will continue to add body and depth of flavor for 2 years. And extract will keep indefinitely if kept in a cool dark place. You may experiment with substituting the vodka with rum or brandy for different flavored extracts. 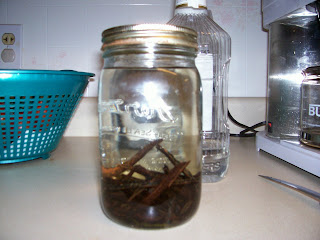 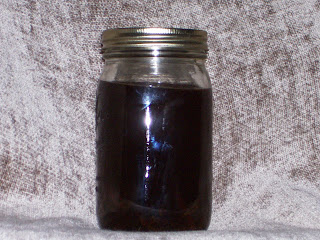