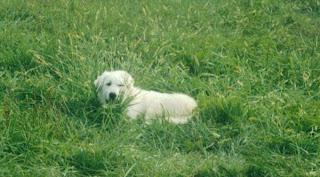 One of the first things we bought for our livestock was a livestock guardian dog (LGD). Bred for the specific purpose of protecting and guarding livestock, the LGD's have been used for centuries. Since we had coyotes, bears, along with sightings and sounds of mountain lions close by, we started looking around for a LGD.


We chose to bring home a Great Pyrenees puppy to add to the herd. Their protectiveness and devotion is instinctual, brought about by simply raising them with the animals you want them to protect.

Michael is the first Pyrenees we brought home. Michael was supposed to be a male, and was named after the archangel Michael- chief defender of the good from evil. It seemed fitting. We put this little ball of fluff in with the goats, tried to keep handling the pup to a minimum, talking with ‘him’ letting him learn his name & to come when called because his main bond was to be with the goats. Two weeks later I was picking hay out of his coat and doing a general checking over when the discovery was made that he was actually a she. I still get a chuckle over this mix 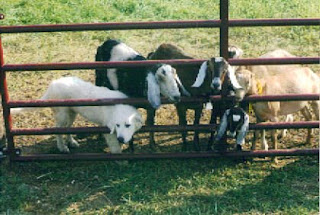 up, and we let the name stick.

Over the years she has lived up to this name protecting the herd from the feral dog packs, coyotes and any other critter that has dared get too close to her charges. 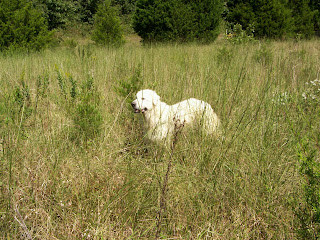 Who says a girl can't be named Micheal. :) I love it, what a cute mix-up. We use Great Pyrenees dogs for livestock guardians too, I love them and wouldn't trade them for the world. Great pictures, I love seeing these dogs out with their herds, just doing their jobs.

I got your email. Thank you so much! I will email you later today.

What a great tribute to Ms. Michael! :)

I believe my pyr mix barks at the stars each night, but they sure do the job they are designed to do!

Have a young'un right now that is driving me crazy with the all night barking. Hopefully she will start figuring out that not every little thing needs my attention.