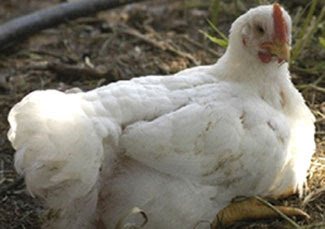 This year we raised some Cornish Cross chickens for the first time.

If I had known how easy they were to pluck, we would have raised them a long time ago. Evidently ease of feather removal was part of the breeding selection. They never did get a lot of feathers on the breast, and the ground was always littered with them as if they were molting.

The same day I bought the Cornish, I also brought home a few Partridge Cochin chicks for my home flock. With the two types being raised side by side it was amazing to see the growth difference. In just the first week the Cornish Cross grew to be twice the size of the Cochins. Also the behavioral difference of the Cornish was surprising.

The Cornish chicks were a lazy bunch spending a good bit of the time stretched out on their side resting. It scared me the first time I saw them because I thought they had all died. They didn’t waste much energy walking and scratching around. The only time they hustled at all was when their food dish was being refilled.

Once they had feathered out, they were moved outside on grass in a moveable round fence. This also slowed down their growth enough so their legs weren’t compromised. At 8 weeks we butchered the largest half of the group and they dressed out just over 4 pounds. The rest were done 2 weeks later and they dressed out 5.5+ pounds apiece.

They are tender, tastier, and have more meat than the store bought ones. We will definitely be raising these again in the future.
Posted by Hidden Brook Farm at 7:56 AM